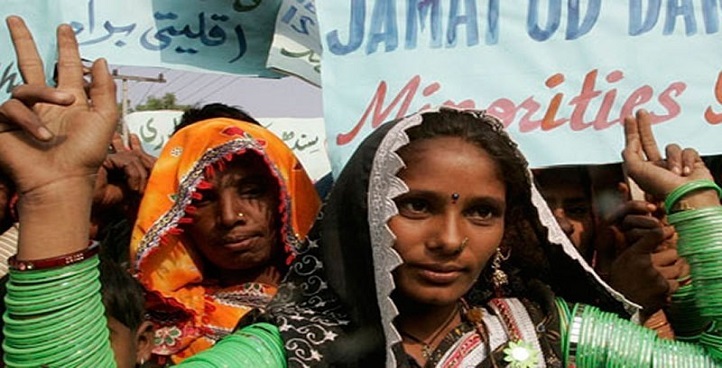 ISLAMABAD: Clerics and religious scholars who attended a meeting called by the Ministry of Religious Affairs to discuss the draft of the anti-forced conversion bill have expressed serious reservations over the bill and warned the ministry that it cannot be implemented in its current shape.

The ministry invited only Muslim stakeholders to hold the in-camera meeting on Monday. Members of the National Commission for Minorities (NCM) or its chairman, Chela Ram, were not invited to the meeting. The lone Muslim member of the NCM, Mufti Gulzar Naeemi, was invited in the capacity of a local cleric.

The meeting was chaired by Minister for Religious Affairs Pir Noorul Haq Qadri. Some senior officials of the ministry, including heads of the Interfaith Harmony Wing and Haj Wing, were also in attendance.

Council of Islamic Ideology (CII) chairman Dr Qibla Ayaz, CII’s other officials and some local clerics were invited to the meeting.

The agenda of and discussion at the meeting has not been made public. However, one of its participants said that they were informed that the draft of the “Prohibition of Forced Conversion Act, 2021” has been received from the Ministry of Human Rights.

“The copies of the draft were shared and discussions were held after everyone in the room went through the papers,” the participant added.

The clerics and religious scholars in the review meeting expressed serious reservations over it and objected to several clauses, including the minimum age of conversion. It was noted that the minimum age of 18 years for conversion was incorrect, and it was pointed out that this age bracket was contrary to the draft domestic violence bill that was currently with the law ministry.

“When parents cannot even scold their children under the domestic violence bill, so can they stop their children from embracing Islam?” one of the clerics was quoted as saying.

The participant also observed that the procedure allowed under the draft law for conversion was too cumbersome.

Meanwhile, the copy of the draft bill, which is available with Dawn, shows that any non-Muslim, who is not a child, and is able and willing to convert to another religion will apply for a conversion certificate from an additional sessions judge of the area where he or she is residing.

The draft law highlights that the application will have to include the name of a non-Muslim who is willing to change the religion, age and gender, CNIC number, details of parents, siblings, children and spouse (if any), current religion and the reason to convert to the new religion.

The draft law states that the additional sessions judge will set a date for interview within seven days of receipt of an application for conversion, and on the date the judge will ensure that the conversion is not under any duress and not due to any deceit or fraudulent misrepresentation.

The proposed law states that the “Judge may award a time period of 90 days to the non-Muslim to undertake a comparative study of the religions and return to the office of the Additional Sessions Judge”.

After satisfaction, the judge will the certificate of change of religion.

The proposed law also awards punishment between five to 10 years and a fine from Rs100,000 to Rs200,000 to any person who uses criminal force to convert a person to another religion.

While any person who is an abettor to a forced conversion will be liable to imprisonment from three to five years and a fine of Rs100,000.

It has been highlighted that the age of the person willing to convert his/her religion will be determined by either the child’s birth certificate, or school enrolment certificate, or Nadra B-Form.

“Only in the absence of such forms the child’s age may be determined on the basis of a medical examination,” the draft added.

The proposed law also states that the case of forced conversion will have be disposed of within 90 days by the Court, while appeal against a conviction or acquittal of an offence under this Act can be presented before the respective High Court within ten days from the date on which copy of the order passed by the Court of Session is supplied to the appellant.