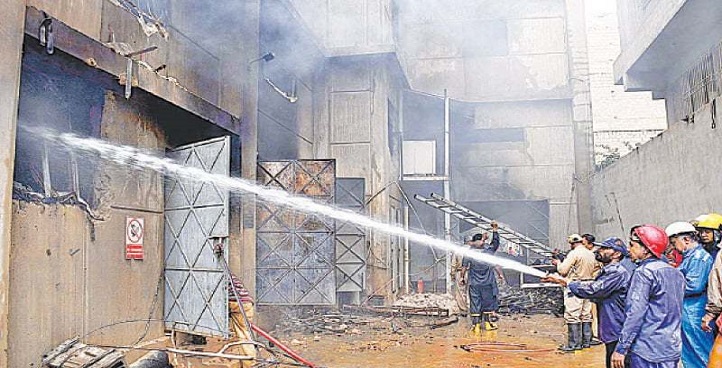 Karachi police on Friday registered a case against the owner and several officials of a factory in Mehran Town following a devastating fire that killed 16 workers.

"Proper investigation has been initiated in this case and justice will be ensured," Karachi Administrator Murtaza Wahab said on Twitter on Saturday.

The FIR, also shared by Wahab, has been registered under Sections 322 (punishment for murder) and 34 (acts done by several persons in furtherance of common intention) of the Pakistan Penal Code.

The case has been registered against building and factory owner Ali Mehta, manager Imran Zaidi, supervisors Zafar and Rehan, and guard Syed Zareen.

The FIR stated that the building did not have an emergency exit or an emergency alarm in case an untoward incident were to take place. "The building is constructed in such a way that no one can exit if there is an emergency situation," it said.

Meanwhile, Wahab also said that the families of those killed in the incident will receive Rs1 million as compensation by the the provincial government.

In a statement, the Karachi administrator said that the provincial government stands with the heirs of the deceased during this difficult time. He added that those injured in the fire were being provided the best possible medical treatment.

All the workers suffocated to death in the fire that was apparently caused due to a short circuit.

According to officials and witnesses, the blaze erupted under the stairs of the ground-plus-two-storey factory, situated in Mehran Town of Korangi Industrial Area, and spread rapidly to other places due to some "adhesive chemicals" kept there.

Initial investigation identified short circuit as the cause of fire, while a post-mortem examination revealed cardio-respiratory failure, secondary to asphyxia, caused by inhalation of smoke and soot from the fire led to suffocation and subsequent death.

Five members of an extended family, including three brothers, were among the victims.

A senior officer who wished not to be named said the factory manufactured trolley bags and had stored adhesive chemicals.

When the fire broke out, it spread rapidly because of presence of chemicals and more deaths occurred. The factory was located in a congested area and it was obvious that safety measures were not in place, the officer said.