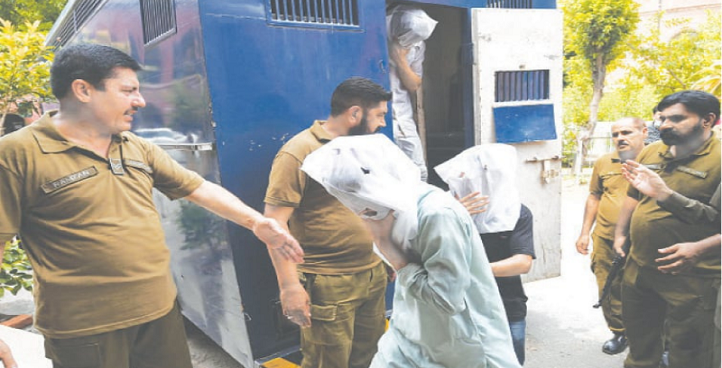 LAHORE: The city police arrested 36 more suspects in the Minar-i-Pakistan case of assaulting a TikToker while another video clip of sexual assault on the victim went viral on Saturday.

The video clip showed the helpless and terrified woman was subjected to a horrifying ordeal and some youngsters tearing off her clothes.

In the related development, Inspector General of Police has made appointment of new Lahore Operations SSP and SP City Division besides making posting of other two police officers who were suspended from service due to [alleged] negligence in the case.

The IGP confirmed 36 more arrests on Saturday, giving tally of 66 suspects who have been taken into custody in the TikToker case so far.

Most arrests came from the surroundings of the Minar-i-Pakistan from where a large number of people had participated in the Independence Day.

40 others sent to jail for identification parade

They were taken into custody on the basis of the reports issued by Nadra.

In his statement, the IG said the police teams formed for the purpose had carried out raids at 27 points/areas of the city.

CCPO Ghulam Mahmood Dogar said the police had geo-fenced 28,000 people and shortlisted 350 suspects to grill them in the case.

The Punjab government’s spokesperson said nearly 100 suspects have been taken into custody in this particular case.

The new mobile phone footage showed some young men tearing the clothes of the girl and a few others trying to rescue her from the offenders.

The footage showed the attackers laughing at Ayesha Akram and using abusive language.

In the second video clip, the young offenders formed circles around the woman, ripped her clothes off and groped her.

Though a few men were trying to rescue her, the crowd of offenders was so much big that she was struggling helplessly to avoid attacks by many young men, the footage showed.In a massive action nearly 30 arrests were made on Friday when the politicians, human rights organisations and civil society members strongly condemned the incident and mounted pressure on the law-enforcement agencies for action.

There were also some reports that the police have also grilled ‘Rambo’, the partner of Ayesha Akram, for being with her at the Greater Iqbal Park when the incident of assault was reported.

The police also made deployment at the Shahdara residence of the girl for her security when her family members alleged that they were feeling insecure after registration of case against over 400 suspects.

A judicial magistrate on Saturday sent 40 suspects to jail for their identification parade in connection with the Minar-i-Pakistan assault case.

Lorry Adda police brought the suspects to the district courts in a prison van with covered faces.

The investigating officer sought the court’s permission for the conduct of identification parade of the suspects to identify the culprits involved in the incident.

He told the magistrate that the complainant woman would try to identify the suspects in the jail.

The magistrate allowed the police to shift the suspects to the judicial lockup for 14 days and directed the jail authorities to make special arrangements for the identification parade.

Some of the suspects alleged before the court that TikToker Ayesha Baig had herself invited them to the Minar-i-Pakistan to make videos. They asked the court to order the police to also arrest the TikToker and her team members to reveal the facts of the incident.

The parents of some of the suspects also gathered outside the court and claimed that their sons had been wrongly arrested by the police.

Meanwhile, a sessions court allowed interim pre-arrest bail to a suspect, Shehroze Saeed, a resident of the Lahore General Hospital area, in the TikToker assault case.

The suspect, along with his lawyer, appeared before the court and complained about police raids on his residence. The counsel said the petitioner had gone to the Greater Iqbal Park to celebrate the Independence Day and had nothing to do with the assault incident.

He said the petitioner was ready to join the investigation to prove his innocence, but the police wanted to arrest him with mala fide intention.

The police had registered the FIR against 400 unidentified persons for assaulting the complainant, molesting and stripping her.

Sections 354-A (assault or use of criminal force against woman and stripping her), 382 (theft after preparation made for causing death, hurt or restraint in order to commit the theft), 147 (rioting) and 149 (unlawful assembly) of the Pakistan Penal Code have been included in the FIR.