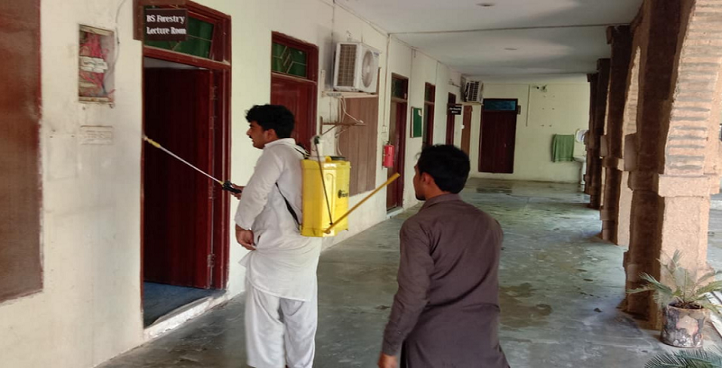 PESHAWAR: The University of Agriculture Dera Ismail Khan is understood to be using the tuition fees collected from students to pay teachers as neither the provincial government nor the Higher Education Commission has provided it with any funds since the start of classes two years ago.

Insiders told Dawn that the salary paid to the faculty members, who held PhD and MPhil degrees, was even less than the minimum wage fixed by the provincial government for unskilled workers.

They said the teachers were paid Rs15,000 every month, while the minimum monthly wage was Rs21,000.

The sources claimed that the vice-chancellor hadn’t received salary and official car since his appointment in Oct 2019.

They said the provincial cabinet had approved Rs400 million for the university five months ago but the finance department had yet to release it.

The sources said the university was a picture of the government’s neglect, especially when billions of rupees had been doled out for the establishment of universities in Swat, the home district of Chief Minister Mahmood Khan.

The cabinet had approved Rs400 million funds for the university in a meeting the chief minister chaired on March 16 this year.

The denial of funds to the university and the payment of meagre salary to its teachers also came under discussion in the provincial assembly around four months ago.

Responding to the opposition’s criticism on the issue, special assistant to the chief minister on higher education Kamran Bangash had declared on the floor of the house that the government had processed the release of funds and would disburse them soon.

A faculty member of the university told Dawn that it took almost eight months for the approval of the Rs400 million funding summary by the cabinet.

He wondered why the finance department was denying the university desperately-needed funds even after the cabinet’s nod.

“If there’s any forum above the cabinet, we’re ready to approach it, too, to claim our right,” he said.

The teacher claimed that the university contacted the finance department in May for the money but officials at the helm revealed that the fiscal year’s last quarter had begun and no funds were available with the government and that the money would be released in the next financial year i.e. 2021-22.

He added that after the new fiscal began in July, the university reminded the department to make that payment but the latter refused to do so saying a committee formed by the government to review financial conditions of the universities would decide the fate of the funding.

The teacher said the financial constraints had forced the badly-paid faculty members to perform the university’s administrative and planning matters as well.

He wondered why the government had established the university if it wasn’t to be funded afterwards and said it was unfair to subject students to an ‘unfit’ learning environment.

The faculty member said the university’s only source of revenue was the fee collected from students and that, too, was used to pay salaries, buildingrent and electricity bill.

The university offers the bachelor of studies programmes in five disciplines, including forestry, agriculture, zoology, botany and mathematics, and three years diploma course in animal sciences.

When contacted, Vice-Chancellor Masroor Ellahi Babar confirmed the non-provision of funds by the provincial government and HEC to the university during the last two years ago.

He, however, kept his fingers crossed that the required funds would be released ‘soon’ to help address the university’s financial problems.

Special assistant to the chief minister on higher education Kamran Bangash was not available for comments on the matter.