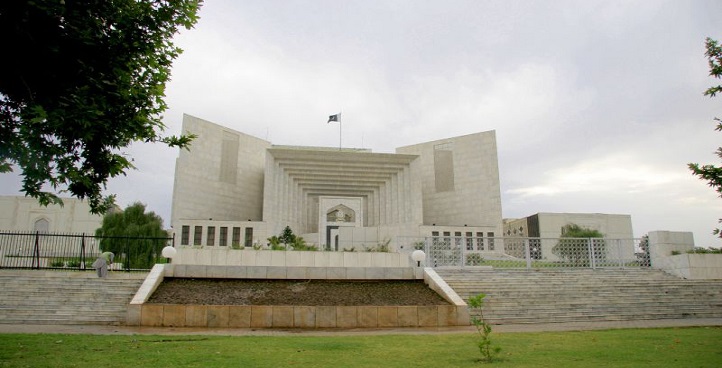 ISLAMABAD: The Supreme Court has asked three senior officials to appear before it on Aug 26 to hear the government’s version on the rising incidents of harassment of journalists.

The three officials are: the interior secretary, the Federal Investigation Agency’s director general and the Islamabad police inspector general.

The court issued the directives in response to a four-page petition complaining that journalists were facing increasing acts of intimidation at the hands of security agencies.

The court regretted that the FIA appeared to have overstepped its mandate and undermined the nation’s confidence in the judiciary.

A two-judge SC bench, consisting of Justice Qazi Faez Isa and Justice Jamal Khan Mandokhel, also issued notices to the secretaries of information and broadcasting, religious affairs and human rights ministries as well as to the Council of Pakistan Newspaper Editors (CPNE), the All Pakistan Newspapers Society (APNS), the Pakistan Broadcasters Association (PBA), the Pakistan Federal Union of Journalists (PFUJ) and the Pakistan Electronic Media Regulatory Authority (Pemra), asking them to state whether the allegations made in the application were correct or not.

The apex court took up the matter after Abdul Qayyum Siddiqui, a former president of the Press Association of the Supreme Court (PAS), drew its attention to the rising incidents of harassment of journalists.

The court observed that since the application had raised matters of public importance with reference to the enforcement of fundamental rights, it met the criteria for invoking Article 184(3) of the Constitution..

Moreover, the Supreme Court observed, if the allegations were true it would be a grave transgression of the Constitution requiring urgent redress.

The court issued notices to the heads of the Pakistan Television Corporation (PTC) and the Pakistan Broadcasting Corporation (PBC), asking them to reply in writing whether they uphold the fundamental right of a free press and comply with different judgements in this regard.

Attorney General Khalid Jawed Khan and the advocates general of the four provinces and Islamabad Capital Territory were issued notices under the Code of Civil Procedure.

According to the order, journalists were being harassed, intimidated, attacked and shot at. “There are no consequences for the perpetrators and those who should be protecting journalists and ensuring freedom of the press are themselves involved.”

The court’s order made a reference to a press release issued by the FIA stating that criminal cases had been registered against some journalists because they reported against the judiciary.

But the press release did not disclose what was said against the judiciary.

“The press release creates an impression as if criminal cases were registered at the behest of the judiciary, and in doing so it portrays the judiciary to be inimical to the guaranteed fundamental right of a free press,” the order regretted.

“The FIA appears to have overstepped its mandate and to have undermined the people’s confidence in the judiciary, the guarantor of fundamental rights.”

Such tactics could undermine the respect, regard and confidence of the people in the judiciary and send an impression as if the judiciary stands with the FIA, the order said.

The court asked the FIA director general, “without whose authorisation the press release could not have been issued and who has not retracted it”, to disclose who authorised the issuance of the press release and to explain why had he allowed its issuance, especially since it made mention of the judiciary. He should explain why he did not withdraw the press release if it was issued without his consent, the Supreme Court added.

The court ordered submission of a list of cases filed against journalists. The list should specify the actual content — a transcript of the text which constituted an offence in FIA’s eyes.

Right to pursue any career

The order went on to say that the application complains journalists were not allowed to work freely and pursue their careers, which was a violation of Article 18 as it guarantees right to pursue any lawful ‘profession or occupation’. Therefore, if a media house is pressed to sack any journalist because of that individual’s independent reporting, it appears to violate the provision, the court added.

The Pemra chairman was asked to submit a written reply disclosing action taken against the media houses which resorted to such tactics.

The frequent attacks on journalists and their abduction, including in the federal capital territory, are another violation of fundamental rights raised in the application.

The Constitution’s Article 9 guarantees the right to liberty and Article 10 is a safeguard against illegal arrests and detention. This issue becomes a matter of concern when the perpetrators are not arrested and, all the more so, when it happens under cameras of the Safe City Project in Islamabad, the court observed.

“Inability in this regard may suggest incompetence, which may constitute dereliction of duty, or far worse, abetment, which is an offence.”

Therefore, notices be issued to the Islamabad IG and the interior ministry to submit written replies listing the number of attacks on journalists, the progress made in the investigation of FIRs, and whether the recordings from cameras of the Safe City Project were used to trace out the perpetrators, the order said. It called upon the authorities concerned to disclose the amount spent on the project.

Allegations have been made that if a media house or television channel agrees to project a particular political narrative and suppress a contrary one, it gets financial benefits. It amounts to misuse of taxpayers’ money as such organisations are given advertisements and other incentives from the public exchequer, the Supreme Court observed.

Therefore, notice be issued to the information ministry to specify the amounts paid on account of advertisements during the last financial year and the criteria used in determining the beneficiaries.

Other benefits that may have been given, including foreign trips, be disclosed, the order said. The court asked the information secretary to disclose the ministry’s annual budget and the work it does.

The order observed that Quaid-i-Azam Mohammad Ali Jinnah had once said that a vibrant press was indispensable to a nation since it exposed wrongdoing and highlighted public grievances.

Recent surveys point out that press freedom in the country is at an abysmal level, the order recalled.

Propagating the truth is an obligation stipulated in the Holy Quran. The Prophet (peace be upon him) stated that to speak out against injustice and tyranny constitutes “Jihad-i-Akbar” (greater jihad).

The Supreme Court issued a notice to the religious affairs ministry, asking it whether it had done anything to ensure that publication and broadcast of the truth were encouraged.