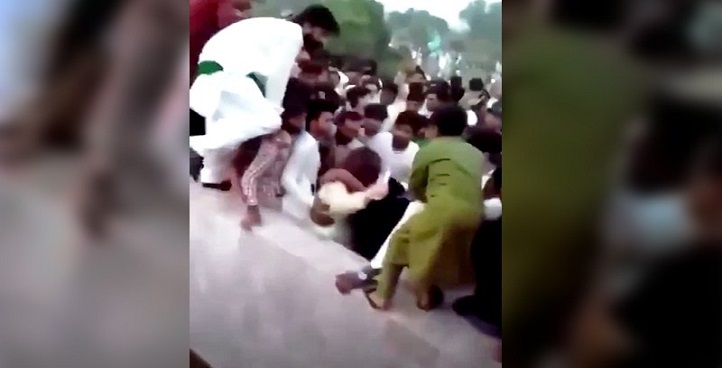 Lahore Police are tracing the hundreds of suspects who assaulted and harassed a female TikToker and her companions at the city's Greater Iqbal Park on Independence Day, the city's police chief said on Wednesday.

In a statement, Capital City Police Officer (CCPO) Ghulam Mahmood Dogar said the suspects were being identified through videos of the incident shared on social media, and that a number of photos and videos had been sent to the National Database and Registration Authority (Nadra) to ascertain their identities.

On Tuesday, the Lorry Adda police had registered a case against nearly 400 suspects for harassing and assaulting the woman at Azadi Flyover.

The incident occurred on August 14 when hundreds of youngsters were celebrating Independence Day at the park. Police moved into action on Tuesday after videos of the episode went viral and sparked an outrage on social media.

CCPO Dogar ordered police to arrest the suspects visible in the video clips and said the culprits would be "traced soon", according to the statement.

"Those who misbehaved with the girl will be dealt with strictly," he was quoted as saying.

Footage is being acquired from Safe City cameras, DHA and TikTok clips, a police official who asked not to be named because the investigation is ongoing told Dawn.com. He said at least 10 suspects had been identified and would be apprehended soon, adding that more suspects would be identified soon.

On Wednesday, Lahore Police also issued an appeal to the public to help identify and arrest the suspects involved in the incident.

The FIR was registered under Sections 354-A (assault or use of criminal force against woman and stripping her of her clothes), 382 (theft after preparation made for causing death, hurt or restraint in order to commit the theft), 147 (rioting) and 149 (unlawful assembly) of the Pakistan Penal Code.

Azhar Mashwani, Punjab chief minister's focal person for digital media, on Wednesday said that "strong and non-bailable clauses" had been added to the FIR.

He added that Punjab Chief Minister Usman Buzdar had ordered police to arrest all the culprits "ASAP".

Meanwhile, PTI leader Zulfi Bukhari said that Prime Minister Imran Khan had personally spoken to the Punjab inspector general of police about the incident. "Police is catching all culprits involved in [the] manhandling of female TikToker in Lahore," he tweeted.

Public figures, including politicians and celebrities, renewed their calls for the protection of women in Pakistan following the incident.

Leader of the Opposition in the National Assembly and PML-N leader Shehbaz Sharif said he was "deeply disturbed" by the harassment incident. "What is more worrying is the direction our society is headed in. The recent anti-women incidents are a reminder that [the] malaise is deep-rooted."

Federal Planning Minister Asad Umar also found the incident very disturbing. "There needs to be serious introspection of the causes of this ugly face of society," he said, adding that "women cannot be left feeling insecure."

"We as parents, teachers & leaders need to reflect upon the upbringing of our youngsters to make public spaces safe for women," she tweeted.

Punjab Finance Minister Makhdoom Hashim Jawan Bakht strongly condemned the assault, saying "the full might of the government will come down" upon those involved in it.

According to the first information report (FIR) of the incident, the complainant stated that she, along with six companions, was filming a video near Minar-e-Pakistan on Independence Day when around 300 to 400 people "attacked us".

She said that she and her companions made a lot of effort to escape from the crowd. Observing the situation, the park's security guard opened the gate to the enclosure around Minar-e-Pakistan, the FIR quoted her as saying.

"However, the crowd was huge and people were scaling the enclosure and coming towards us. People were pushing and pulling me to the extent that they tore my clothes. Several people tried to help me but the crowd was too huge and they kept throwing me in the air," she said.

She further stated that her companions were also assaulted. During the struggle, her ring and earrings were "forcibly taken", in addition to a mobile phone of one of her companions, his identity card and Rs15,000 that he had on his person.

"The unidentified persons assaulted us violently," the complainant added.