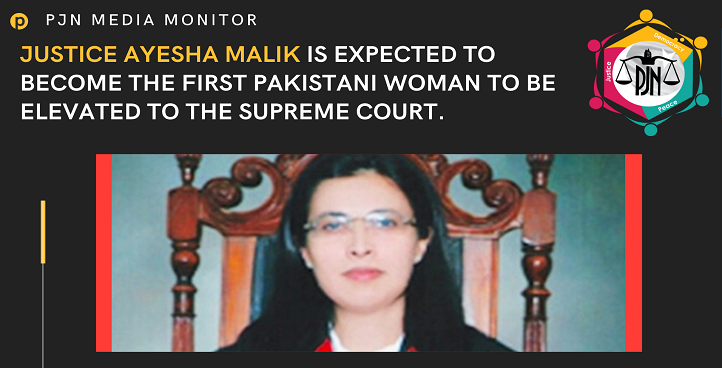 Justice Ayesha Malik is expected to become the first Pakistani woman to be elevated to the Supreme Court.

Chief Justice Gulzar Ahmed has nominated her name. A judicial commission session has been summoned on September 9 on her appointment.

Justice Mushir Alam will retire on August 17 and she is expected to replace him.

Justice Malik has been a Lahore High Court judge since March 27, 2012. She did her BCom from the Government College of Commerce & Economics, Karachi and studied law at Lahore’s Pakistan College of Law, according to her profile on the Lahore High Court’s website. She then went on to complete her LLM from Harvard Law School, where she was named London H Gammon Fellow 1999-1999.

Pakistan was the only country in South Asia to not have appointed a woman judge in the Supreme Court. The Human Rights C0mmission of Pakistan said, in a report, that only 5.3% of the country’s judges are women. The number is the lowest in South Asia.

Pakistan had appointed Khalida Rashid Khan as its first woman judge in 1974. She was appointed anti-corruption judge and then elevated to the high court in 1994.

Ruling on two-finger and hymen tests of rape survivors

Justice Ayesha A Malik had authored the landmark verdict banning two-finger and hymen tests of rape survivors in Punjab.

The court had ruled the tests to be ‘illegal and unconstitutional’.

The 30-page verdict said “virginity testing is highly invasive, having no scientific or medical requirement, yet carried out in the name of medical protocols in sexual violence cases.” The “humiliating practice is used to cast suspicion on the victim, as opposed to focusing on the accused and the incident of sexual violence.”

The verdict said that these tests are a blatant violation of the dignity of a woman. “The conclusion drawn from these tests about a woman’s sexual history and character is a direct attack on her dignity and leads to adverse effects on the social and cultural standing of a victim,” it added.

Cases should be investigated on the basis of whether the accused person raped the survivor or not. “If the victim is found to not be a virgin it cannot and does not suggest that she was not raped or sexually abused.” This shifts the focus of the case on the virginity status of the survivor, it said.

“The victim’s sexual behaviour is totally irrelevant as even the most promiscuous victim does not deserve to be raped, nor should the incident of sexual violence be decided on the basis of a virginity test,” the verdict added.