The first-ever report on Crimes against Journalists, Media Workers and Bloggers launched 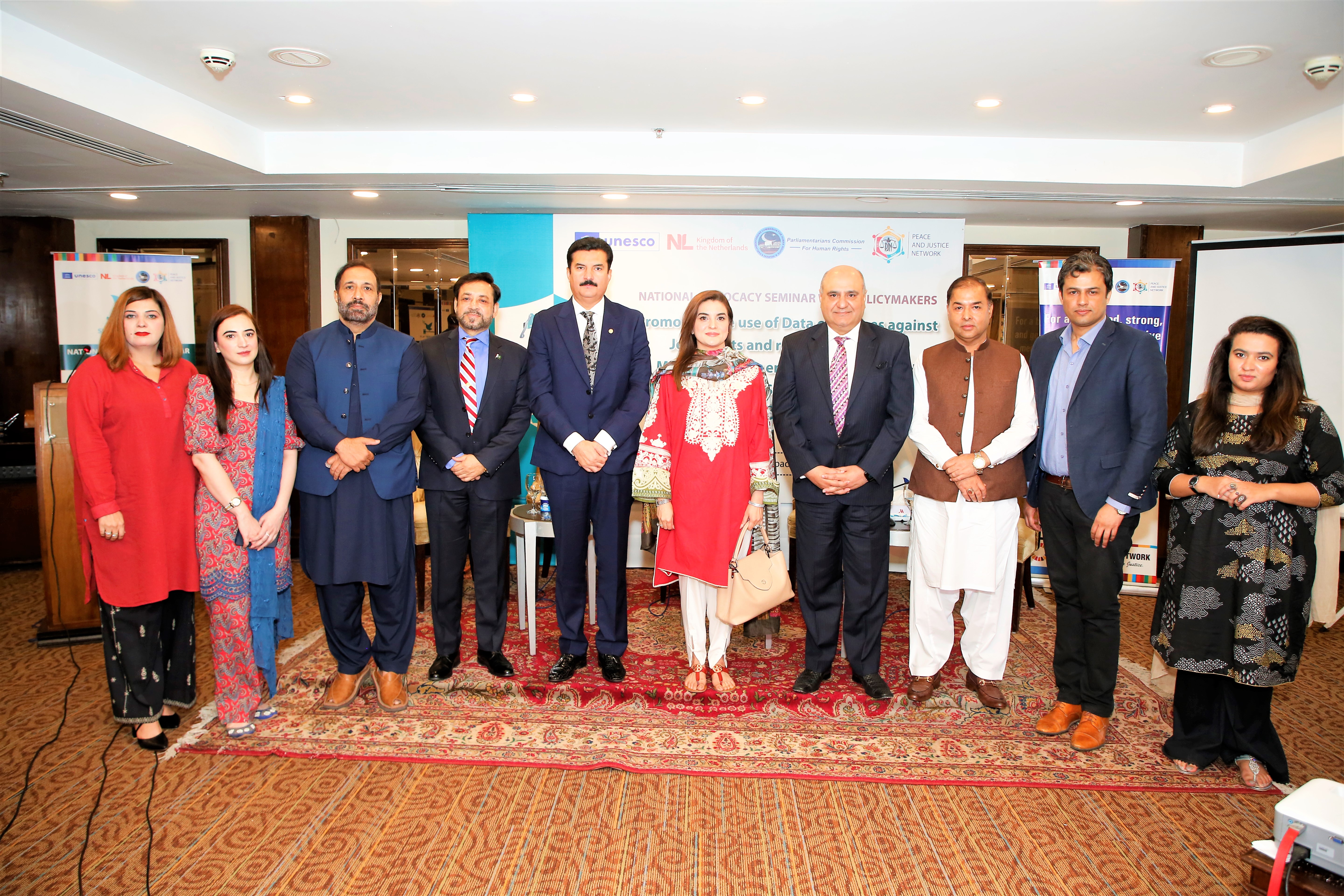 ISLAMABAD: A National Advocacy Seminar to discuss the importance of verified and authenticated data on crimes against Journalists and its significance as credible evidence for policy discourse around the safety of journalists, and the possible roles and responsibilities of various government and non-government stakeholders in this process organised by Parliamentarians Commission on Human Rights and the Peace & Justice Network in Islamabad in collaboration with UNESCO.

The Seminar was attended by legislators, policymakers, senior representatives from government departments, development partners, civil society, and media development organizations as well as a large number of journalists, bloggers and media workers from across Pakistan aimed at promoting the use of reporting on crimes against journalists for effective and efficient state response protecting journalists and preventing crimes against them, as well as collecting and obtaining data on these crimes for balanced, strong and gender-responsive media environment in Pakistan.

Welcoming all the stakeholders, Shafique Chaudhry, Executive Director, Parliamentarians Commission on Human Rights-PCHR, said that at the time of Pakistan’s Sustainable Development Goals (SDGs) 2030 Agenda first Voluntarily National Review (VNR) in 2019 on the status of implementation of SDG’s there was no state reporting on indicator SDG 16.10.1 Crimes against Journalists and Media Workers. Keeping the significance of the indicator for ensuring freedom of expression and safety of journalists and human rights defenders, the National Framework on SDGs approved by the National Economic Council (NEC) declared SDG 16.10.1 as one of the priority targets for Pakistan. The challenge of obtaining verified data from the government against SDG-16.10.1 was identified as the data on crimes against journalists was not available in the compiled form at any level in any government organization.

Responding to the need to fill this gap, UNESCO, Peace & Justice Network and PCHR in collaboration with the National and Provincial SDGs Parliamentary Taskforce initiated this process of establishing an institutionalized data collection and compilation mechanism on crimes against journalists and media workers with the help of government departments, organizations, federal and provincial ministries and, the police department across the country. Now after the hard work of over three long years, Pakistan has developed and produced its first State data gathering and reporting mechanism on SDG 16.10.1 Crimes against Journalists and Media Workers, and now all the stakeholders are able to make more informed and practical steps for the protection of journalists in Pakistan based on this data.

Syed Raza Ali Naqvi, Director, Peace & Justice Network, presented the national data on crimes against journalists, media workers and bloggers for the years 2020 and 2021 collected by the National Police Bureau for state reporting. Mr. Ali also presented the three-year program journey and thanked all the government partners for making it a success and leading from the front. Also shared that the inter-departmental coordination mechanism for recording, reporting, and response to crimes against journalists has been recognized after an extensive consultative process and that will revolve around the Commission for the Protection of Journalists and Media Workers established under the Journalists and Media Workers Act 2021. In the end, he highlighted the need for an active role from legislators and policymakers and the journalists’ rights organizations by effectively utilizing this data for the safety of journalists and media workers, to create a protected environment where freedom of expression can grow, and for addressing impunity on crimes against journalists.

During the national advocacy seminar inaugural session, the Federal Ombudsperson FOSPAH Ms. Kashmala Khan, the former IGP Islamabad Amir Zulfiqar and the IG retd Dr. Kaleem Imam highlighted the need for effective utilization of data on crimes against journalists in policy discourse produced by the State after extensive reform and development process.

While appreciating the efforts made by PCHR and PJN, IGP Amir Zulfiqar highlighted the need for verified cases of crimes against journalists in the line of duty and also highlighted the authentic definition of journalists. He mentioned Unions and press clubs should take this responsibility to identify the working journalist in the era of social media bloggers and journalism online. He also stresses developing protection cells especially for handling crimes against journalists and media workers that they faced in the line of duty. Ex IGP Syed Kaleem Imam also stressed the need for an improved and effective journalists’ protection and response strategy in a growing digital environment with new development each day. Now media is not just limited to print or electronic. This new digital media is bringing new challenges and creating new threats. In this challenging time, such verified data will be helpful for prevention and effective response to threats journalists and media workers are facing.

The concluding session moderated by the senior anchor Urooj Raza Sayyami and Chaired by Dr. Raheem Awan (DG Legal Aid & Justice Authority) with other panelists including Gen Sec NPC Nayyer Ali, DG MOIB Manzoor Memon and former President PFUJ Afzal Butt are of the opinion that we need to start effectively utilizing first of data reporting by the state on the crime against journalists and media workers for ensuring protection needs of journalists and effective state response. There is a need to further strengthen data sets and detailed analysis is needed to review the circumstances of the incidents in order to develop effective operational, administrative, policy and legislative actions. They all appreciated the hard work put in the last three years by all the supporting institutions. Panelists also replied to the questions of journalists and civil society in the audience for further clarity.

DIG National Police Bureau (NPB) Capt. (rtd) Rommel Akram also expressed in his presentation challenges while collecting verified data in this practice and presented the National Crime Management System that NPB is in process of development which will play a critical role in future for effective crime control and protection of citizens. He shared that the crimes against journalists and media workers will also be incorporated into this system and this will help in an effective and efficient state response for their protection needs.